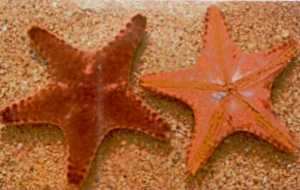 Sea Stars (commonly incorrectly called ‘star fish’) come in many shapes and sizes. They are often difficult to spot because they are masters of disguise, blending superbly into their surroundings. The two most common sea stars on our temperate coast graze on seaweed, though they can be opportunistic feeders eating decaying organisms. Generally sea stars protrude their stomachs outside their mouths, envelop their food and begin to digest their food outside their bodies.