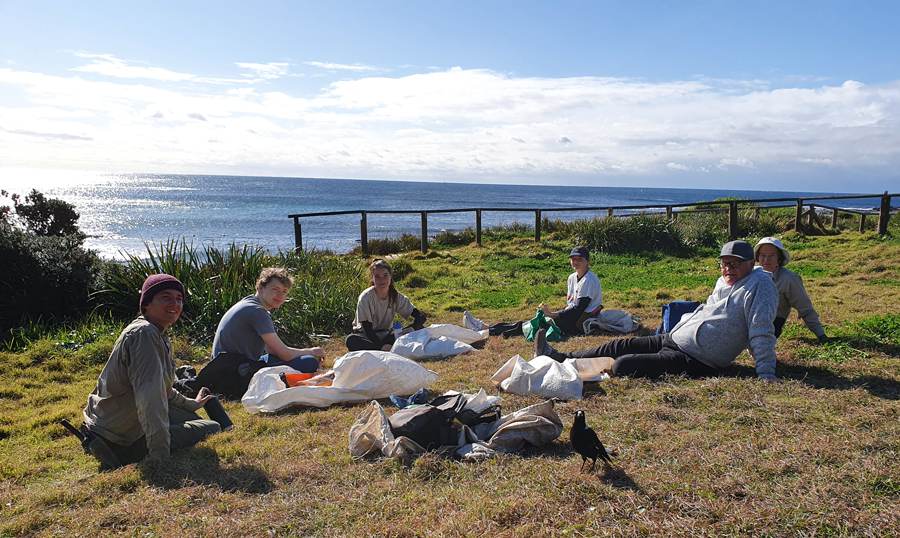 Back after 3 months due to COVID-19, there were 7 people arrived after a rainy early morning to have the dissipate whilst getting ready.

All the tools were sprayed with Mentholated spirits, and each used hand sanitizer before using the pen to sign on. Lisa read through the rules of the day as issued by Council, which included, no sharing of tools and to work 1.5m apart. Our Council appointed supervisor ensured we had all completed the COVID-19 form confirming that we did not have any symptoms.

We started on the top slope on the NW side of the site targeting bitou seedlings and thistle, where we removed the flower heads and bagged them and then the plant removed from ground and left as future mulch – we headed west along the cleared line and then north down the slope; working this area until Morning tea time at 10:30 when we had a pair of sea eagles circle around us for awhile and a magpie singing for food.

After morning tea we worked on the flat eastern area, but still targeting the same weeds, mainly Bitou seedings, thistles and then to a lesser extent Burr Medic and some ehrharta. There was so much work on the site we could have done with an army, but we covered some ground and we were all happy with the amount that was accomplished. At the top we were lucky enough to site the spray from a couple of whales that were a far way out to sea, so not able to see them breach.

For the October working bee, we were hopeful to have some Dianella and Isolepis nodosa for planting and we were going to focus on mulching and branch covering of all plantings on the site to help them through the upcoming summer.

However unfortunately, heavy rain put a stop to our working bee for this month. 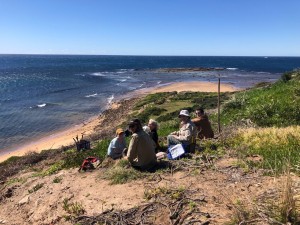 We had a small group of six people this month and given we had about 3 dozen plants there was no clearing of Bitou.

We decided initially on two areas for planting the 8 different species we had; one had to be cleared of  Ehrharta erecta which took some time (this weed is native to Southern Africa and Yemen) where we planted 3 of the 8 banksia which were well mulched and guards put in (made in NZ from recycled material!) – we had the cardboard guards for each of the 8 Banksia.

The other was a bare area east of a gully on the western slope, so we got pigs face cuttings from other areas of our site, and used a number of other species of plants we had to plant this area out.  It was a dry exposed area so we made deep wells and ensured lots of mulch and covered with old branches – as we find new plantings do much better when covered for some months with these old branches due to the expose site.

The rest of our plants were planted into 3 near-by areas adjacent to existing varietal vegetation to increase existing good vegetation areas and move into previously cleared bitou areas with new plants.  Once again we were extremely diligent with water wells for the small tube plants, generous mulch and branches covering of the new planting.

Members had brought water and so they were also well watered into their new place in the world – let’s hope that they survive and thrive on beautiful Long Reef and add to increasing a more natural environment to the area.

It was a lovely sunny day today and perfect temperature for working. Everyone enjoyed our morning tea sitting in the sun and chatting. We had 14 at our Reefcare day, another great turn up. 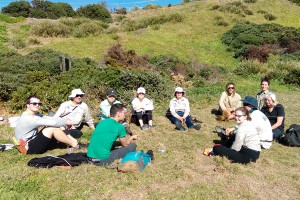 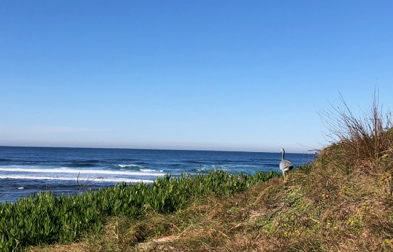 The highlight of the day was seeing a huge whale, not far off shore. There were a lot of swallows, a willy wagtail and a white faced Heron.

The Bitou clearers group continued to move west and work the area that was sprayed via drone 2 months ago. The below photos show the group working on Bitou removal. The dieback (below left) is where the drone sprayed the Bitou. 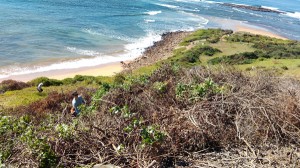 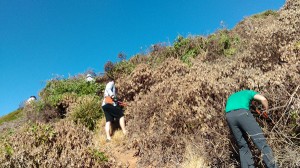 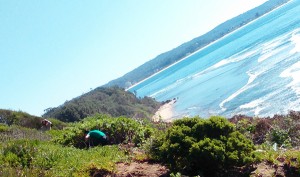 This photo (left) shows work happening west of the valley where the much of the crew worked last month. 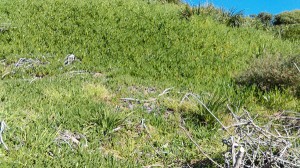 In previous cleared areas, we have a seriously good cover of pigs face which has prevented erosion. See photo to the right.

Next month we plan to start removing some of the pigs face if plants are available. We intend to start replicating the Banksia bush further west along this cliff line.

We had a great turn up today working in the most beautiful conditions with mainly sunny periods, a little cloud and a perfect temperature. It was so nice we all took a longer morning tea to enjoy beautiful Long Reef and basking in the superb sunshine. 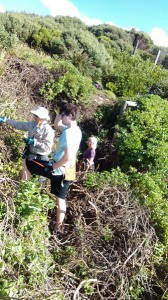 There was a large turn out including 3 new volunteers – one with a lot of bush regenerating experience. Seven of the people worked up on the northern western and western hill side removing bitou. Each month with this great crew, we are able to move further and further west.  It was tough work today as they were in a steep gully and the bitou was dense. 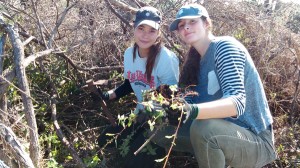 Three of us worked on removing the few patches of Asthma weed just off the western side of the track. This area has been superficially tackled a number of times this year, but today was a concerted effort and we probably got about 90% of this horrible weed.  Much of it was very difficult to get as it was under shrubs and in woody area.

Acacia myrtifolia, known colloquially as myrtle wattle, is a species of Acacia native to coastal areas of southern and eastern Australia. We planted 7 down the eastern side of the fence line and  another 7 further up the slope where there are a number of other well established shrubs. 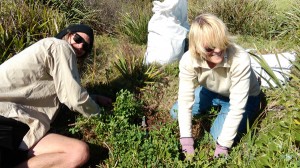 After morning tea a couple of people targeted the Burr Medic. Being winter, it has only just started to germinate from last year’s seeds. They also cleared an area with a number of clumps of Parramatta grass. 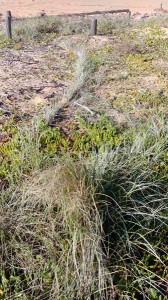 This image shows some of the spinafex on the far eastern side where years ago the bitou was burnt. The spinafex is taking off in a number of places and the area is starting to look really good with very little sand exposed to erosion. 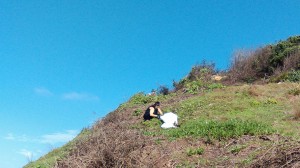 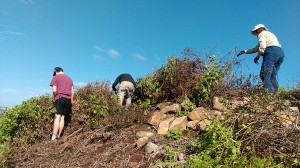 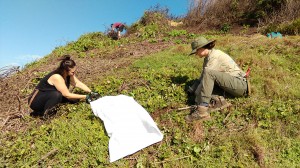 Yesterday some of  the Reefcare volunteers worked on the south eastern side of the site of the track down to the headland. It is particularly steep and to do any more work in this area would require someone with ropes to secure them should they fall.

We have cleared to the north of this site and are now moving south. Where the Bitou remains the Themeda is an absolutely amazingly perfectly condition, it just beautiful. This soil is quite rich and has some volcanic soil which can be found in areas around Long Reef.  In May as we hope to plant about a dozen more Themeda in this cleared area in the good volcanic soil. 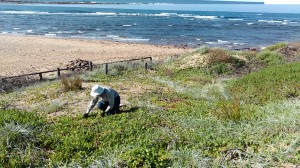 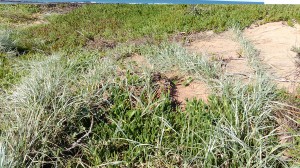 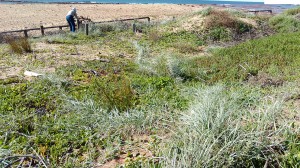 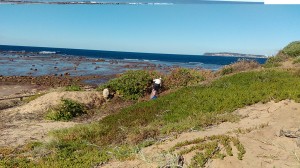 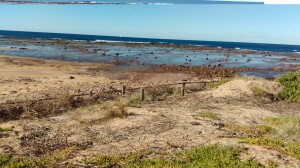 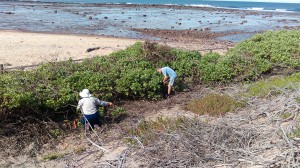 In 2016 this area was burnt by deliberate fire, destroying a reasonable area of Bitou (less work for us). After the fire happened, we planted some Pigs Face to stabilise the exposed sand dunes. Here are a few photos showing this area as it looks today. The Pig Face is doing really well along with Spinifex grass. We monitor this site each month and when ever Bitou tries to regrow we remove out the seedlings. 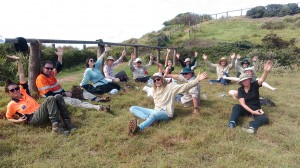 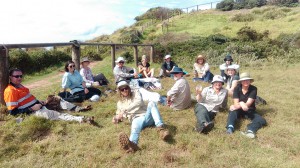 Although we only worked to 10:30 due to the heat, there was still a lot of great work done on the site. More Bitou has been cut back on two fronts one on the western slope and then on the flat to the east of the track. The weeders concentrated on the Oat Grass which is seriously much worse than it was last year – by attacking it from the top along the track down, we aim to stop more of the seeds heading downhill to our site.

Left and Middle: Images from our October Working Bee. These magpies were unusually friendly, approaching the volunteers singing, looking for food.
Right: A photo of bitou removal on the top southern western slope.

Left: Northern eastern slope a year apart
Right: A Before and After – this is on the most eastern point of our work area at Long Reef. This image shows the difference over a year, the work our volunteers have done to prevent erosion on site. 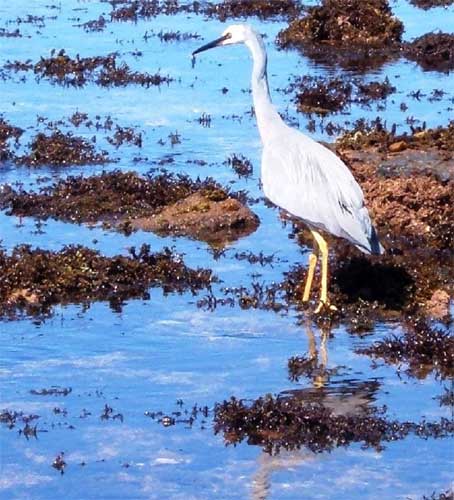 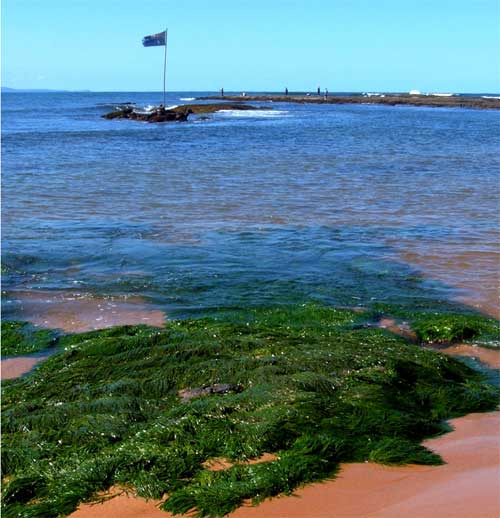 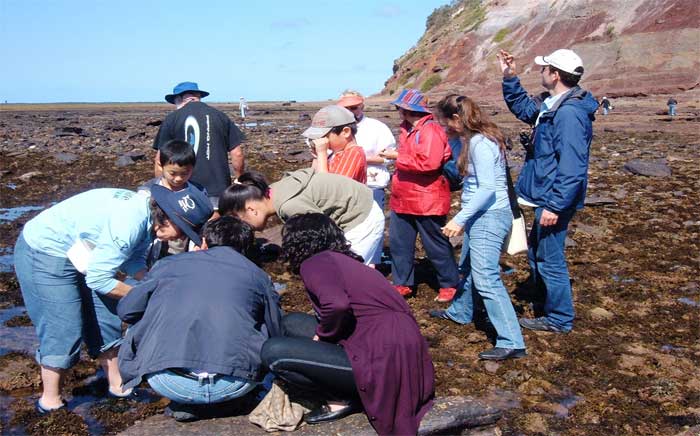