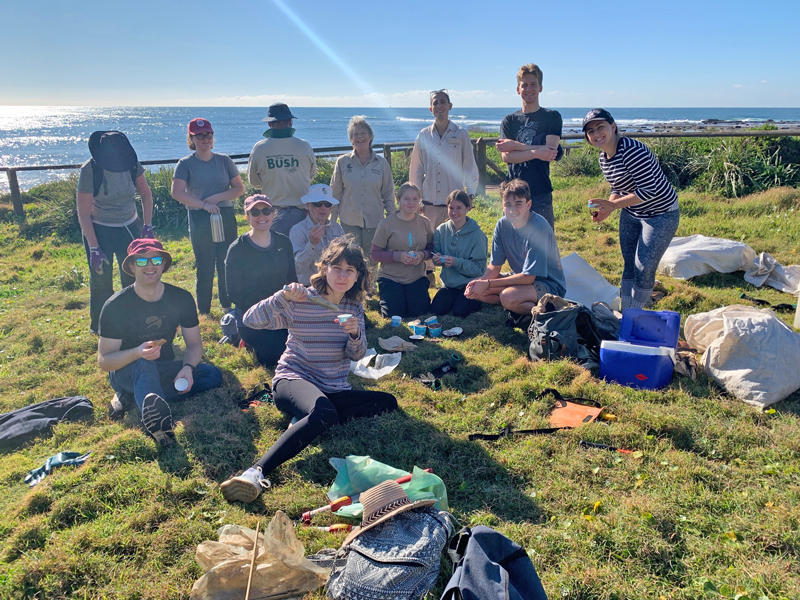 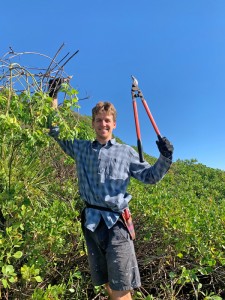 participate in for World Environment Day. Hence our group were privileged to have Ronnie and Brigitte for the morning. Not only that, Josh arranged for some amazing biscuits and ice-cream from Ben and Jerry’s for the group to indulge in for morning tea.
Northern Beaches Council arranged for an extra Supervisor and tools – as not only the two staff from Ben and Jerry’s we also had two new volunteers for the day, Keisha and Sacha who are undertaking their Duke of Edinburgh. So Reefcare had Matt from Tooligoona and Emmie as Supervisors.

The group met at 8:30 so that a Site Introduction by Emmie could be completed for all the new volunteers – which was great, as Reefcare had a few members that had not completed the site induction program. 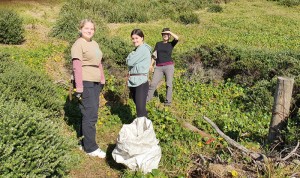 Emmie with Keisha and Sacha worked on Bidens, Burr Medic and Asthma weed and Ehrharta just on the western side of the track toward the bottom (we have worked here at this site for the last 5 months – we are getting there are there were certainly far less weeds there this month) – when this was completed, they started to work on some of the early arrival of Burr Medic on the eastern flat next to the track near the Birds of Longreef sign. 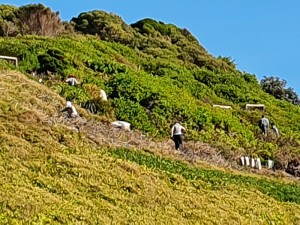 Medic (left more than enough for Keisha ns Sacha for follow up work) and then moving up to the eastern edge heading south, removing the non-native pig’s face back from the Themeda and removing the underlying erharta.

Then there was the western team – Brad lead the planting for the gully with the plants designated for this area, and then joined the rest of the team heading west to get rid of the Bitou. Merrilyn spent a lot of time targeting thistles. In this area working we had Des, Brad, Merrilyn, Gen, Josh, Alex and Michael. 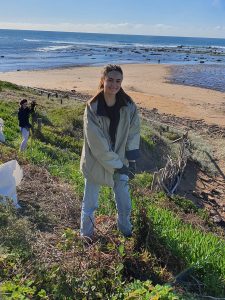 Ivana, Emma and Donya cleared some non-native pig’s face on the top south western slope and then planted about 10 tube stock into this area. They then worked on Burr Medic.

Morning tea was very special today thanks to Ben and Jerry’s supplies which Josh brought along, with included four flavours of ice cream – triple caramel chunk, chocolate fudge, strawberry cheesecake and cookies and cream as well as some chocolate fudge brownies and choc chip cookies. How spoilt were we! Thank you Ben and Jerry’s.
After morning tea Brad, Gen, Josh, Alex and Michael all continued to work on Bitou removal, Merrilyn removed thistles whilst Des roamed the western
site pulling out small seeded Bitou.
Ivana, Emma and Donya worked on Burr Medic removal just past the line of Lomandra on the north western side and then moved over to the eastern where we worked last month, removing non-native pigs face off the spinifex. The work from last month is looking really 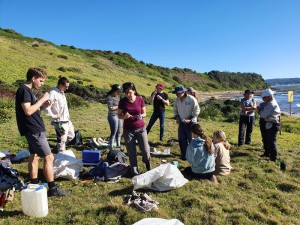 good, so we can continue in this area next month.

Emmie with Keisha and Sacha – planted about 10 plants on the northern side of the track where Josh, Alex and Claire F. had two months ago removed the last of the bitou here. It is fairly stable here, but will be good to get plants in to make sure the area stays stable. It looks like we may have some Canavalia rosea coming up which will be great if this what the small plants are that are coming.
It was a lovely sunny day and lots of accomplished on site today – looking forward to building and continuing this work next month. 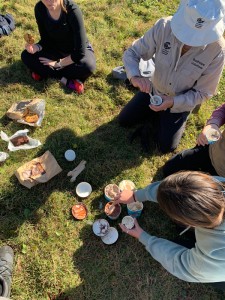