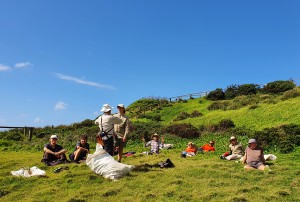 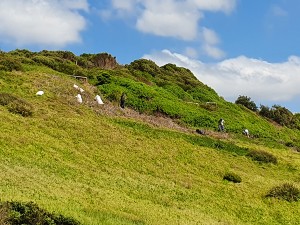 There was a terrific turn up for Reefcare today with 15 volunteers – in just the perfect weather for bush regeneration.  Unfortunately, despite our request for specific plants for the gully, these were not provided, so the game plan for the day had to be seriously modified based on the plants provided (none of which were on the request list!).

Most of the group started at the top section just past the gate to Long Reef headland, removing the weed pigs face off the native plants and moving it back, so that there is room for the good plants to move in.  A few Commelina cyanea tube stock provided and these were planted in a cleared pigs face area.  So ½ the group worked on pulling up the weed pigs face whilst the rest were planting the themeda in a previously cleared area.  Everyone brought 2 litres of water as requested for our new plantings.

With this completed the group moved down the slope to a previously cleared area which due to lack of plants being provided, had not planted out with Themeda –the weeds were Blackberry nightshade (just flowering and small green berries – so bagged before seeding!), thistles in flower and seeding, flea bane, which was seeding and Turkey rhubarb which had a lot of immature seeds and was just about to seed – good timing – this area filled about 3 weed bags.

We then had morning tea a little bit late – it was after 10:30, but it gave time for people to talk to one another and get to meet the two new volunteers, Josh and Alex.  It was also a time to say good bye to Aurelie who’s work contract in Australia has expired and she is returning to France with mixed emotions, of loving Australia, but missing her family.  Four were missing in the morning tea photo as they were working through, due to having to leave at 11:00 for other commitments.  Kim joined the group for morning tea, as he likes to keep up with what we are doing, so that in the background he can support us, as much as physically possible.  As we all know, we have 2 of Kim’s fences which have seriously assisted in erosion control and ‘trespass’ through our working area.  In the last week he has also done maintenance on the public track to Long Reef point which was getting to the point of dangerous.  I had reported this section of the track to Council about a year ago but there was no response = thanks to Kim, this part of the track to Long Reef point is much safer.

After morning tea the group was spread out with Elaine and Aurelie working back on the slope to finish off the weeding in that area, whilst Ivana and Claire F. worked on the eastern area targeting Burr Medic, whilst Jayke, Claire, Josh and Alex worked on the north eastern area on Bitou – and there were a couple of seriously big Bitou to eradicate in this area – and a few more left for next month!