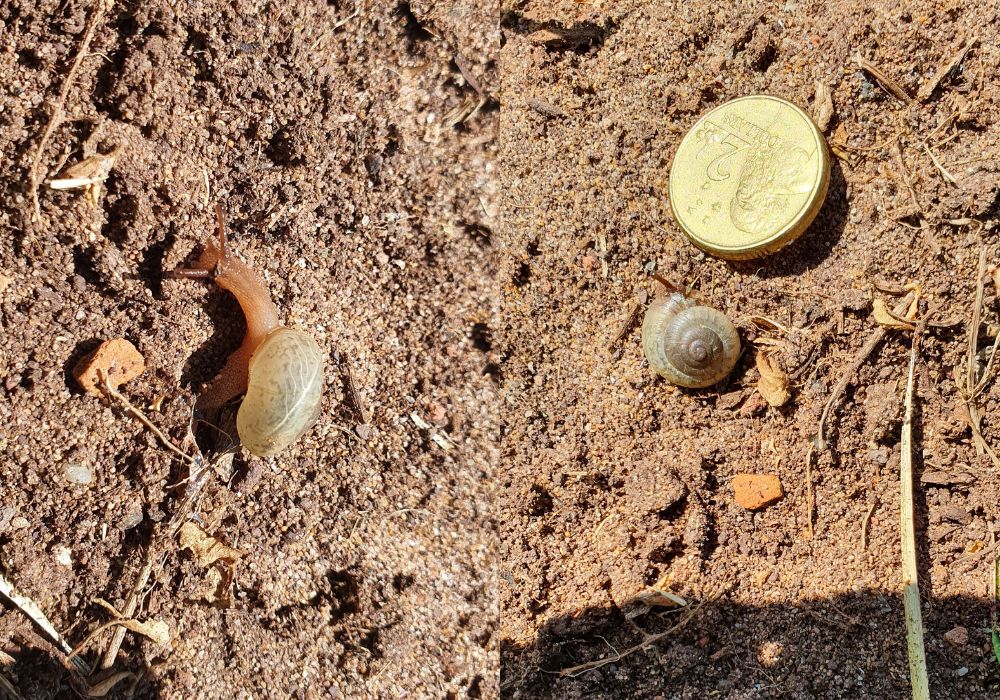 As the common name suggests, this small invasive land snail Bradybaena similaris, the Asian tramp snail, is not a native to Australia.  The common name based on its origins, and its habit of roosting on freight containers and its high dispersal ability means that this may be quite possibly the mostbroadly-distributed species of terrestrial snail in the world.

The Asian Tramp Snail has become well-established in eastern Australia from around Bega on the south coast of New South Wales northwards to the Wet Tropics region of north-eastern Queensland. This successful invader, originally from eastern Asia, has also penetrated inland as far as places such as Longreach, Queensland.

The Asian Tramp Snail consumes a vast variety of plants – they are known for being destructive living under herbs and in foliage in nurseries, gardens, greenhouses, horticulture, market gardens (it loves melons and gourds such as cucumber and pumpkin), vineyards, crops, dunes and weed-infested bushland.  At Long Reef they have been found under a good cover of Warrigal Green, Burr Medic, etc which proves their preferred living under good damp foliage cover.

The width of the shell is about 12 to 16 mm with 5+1⁄2  whorles. The color of the shell is light brown. The shell is sculptured with fine, irregular growth line.  The head of is round with two long, dark tentacles, each with a simple eye at the tip. A shorter set of tentacles lie closer to the mouth. It is active after rainfall.  These snails mature and reproduce quickly with around 20 eggs hatching around 2-4 weeks and living up to 5 years.

The Trump snail can also serve as an intermediate host for several serious parasites including the infamous rat lung worm that can be harmful to humans, the trematode

Eurytrema coelo- maticum a fluke of ruminants such as cattle. The latter parasite can cause losses in milk and meat production (Lapage 1958)