There is an exciting addition to all for Reefcare Volunteers to be aware!

It looks like that Brad Law has found the endangered Maroubra Snail on our site.  Meridolum maryae which is confined to a narrow band of habitat along NSW coast

Brad has been dealing with Dr Stephanie A. Clark – Director,   Invertebrate Identification who advises……

In my paper of 2009, there were specimens from Long Reef ranging in age from 1946 to 1991, but I don’t remember if any of them looked relatively fresh. But if you can find a fresh one that would be great.

As the common name suggests, this small invasive land snail Bradybaena similaris, the Asian tramp snail, is not a native to Australia.  The common name based on its origins, and its habit of roosting on freight containers and its high dispersal ability means that this may be quite possibly the mostbroadly-distributed species of terrestrial snail in the world.

The Asian Tramp Snail has become well-established in eastern Australia from around Bega on the south coast of New South Wales northwards to the Wet Tropics region of north-eastern Queensland. This successful invader, originally from eastern Asia, has also penetrated inland as far as places such as Longreach, Queensland.

The Asian Tramp Snail consumes a vast variety of plants – they are known for being destructive living under herbs and in foliage in nurseries, gardens, greenhouses, horticulture, market gardens (it loves melons and gourds such as cucumber and pumpkin), vineyards, crops, dunes and weed-infested bushland.  At Long Reef they have been found under a good cover of Warrigal Green, Burr Medic, etc which proves their preferred living under good damp foliage cover.

The width of the shell is about 12 to 16 mm with 5+1⁄2  whorles. The color of the shell is light brown. The shell is sculptured with fine, irregular growth line.  The head of is round with two long, dark tentacles, each with a simple eye at the tip. A shorter set of tentacles lie closer to the mouth. It is active after rainfall.  These snails mature and reproduce quickly with around 20 eggs hatching around 2-4 weeks and living up to 5 years.

The Trump snail can also serve as an intermediate host for several serious parasites including the infamous rat lung worm that can be harmful to humans, the trematode

Eurytrema coelo- maticum a fluke of ruminants such as cattle. The latter parasite can cause losses in milk and meat production (Lapage 1958) 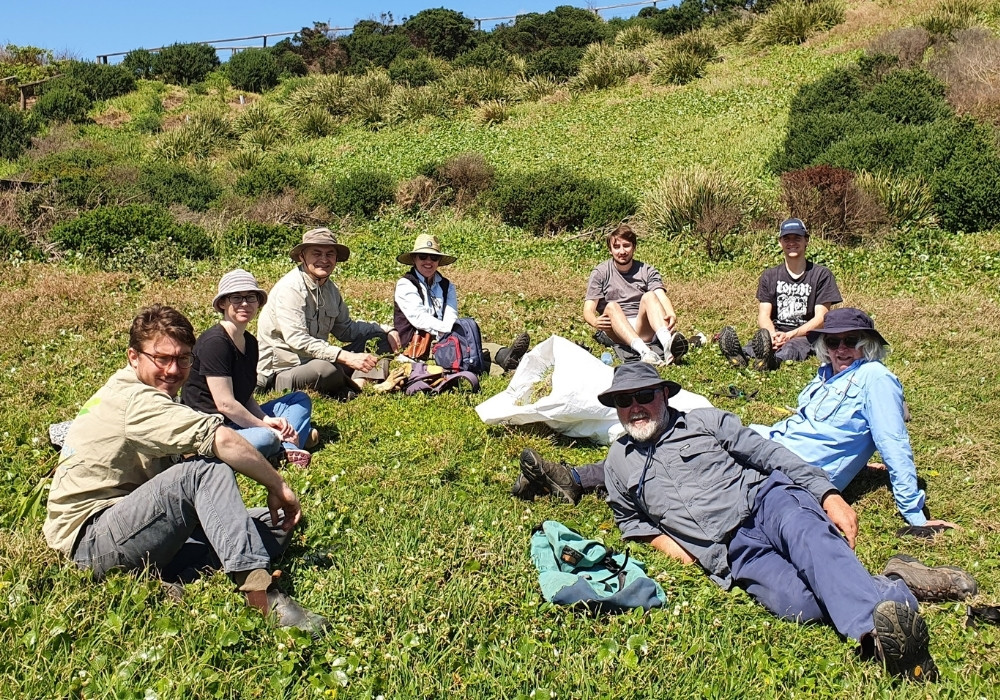 Thankfully and finally a beautiful sunny day, after being severely rained out the last two designated working bees at Long Reef.  The Bromus which had been heading down to our site over the last two years has unfortunately made a significant impact on our site.  I tried to get Council to do something about it last year, but that didn’t happen, so probably explains why we have so much on our site – as it was about to seed just about all of us spent the whole time targeting this weed – Jarrah, Claire, John, Kristy, Alex, Josh and myself.

Julie worked on the far western side removing bitou seedlings, weeded the new plantings that Des put in last year (where most are surviving) cut/scraped and poisoned four big bitou.  Merrilyn and Brad weeded on the western slope with Merrilyn concentrating on her pet hate – Gladiolus caryophyllaceous hybrid.  Brad on top of weeding planted about a dozen plants which Lisa Calder had brought from Curl Curl Community nursery, with seeds/ cuttings from our site.

About 20 minutes before 12 Lisa realised that the red hue over the dead Westingia was Turkey Rhubarb – so six of us rushed across to behead this ghastly vine of all the seed heads.  So, next job will be to get down and remove all those red bulbs.  Will we ever get the time to target Kikuyu?

Unfortunately due to the extremely wet weather the east coast of Australia has been experiencing for a couple of years now, we had to cancel both the September and October designated working dates due to the inclement weather.