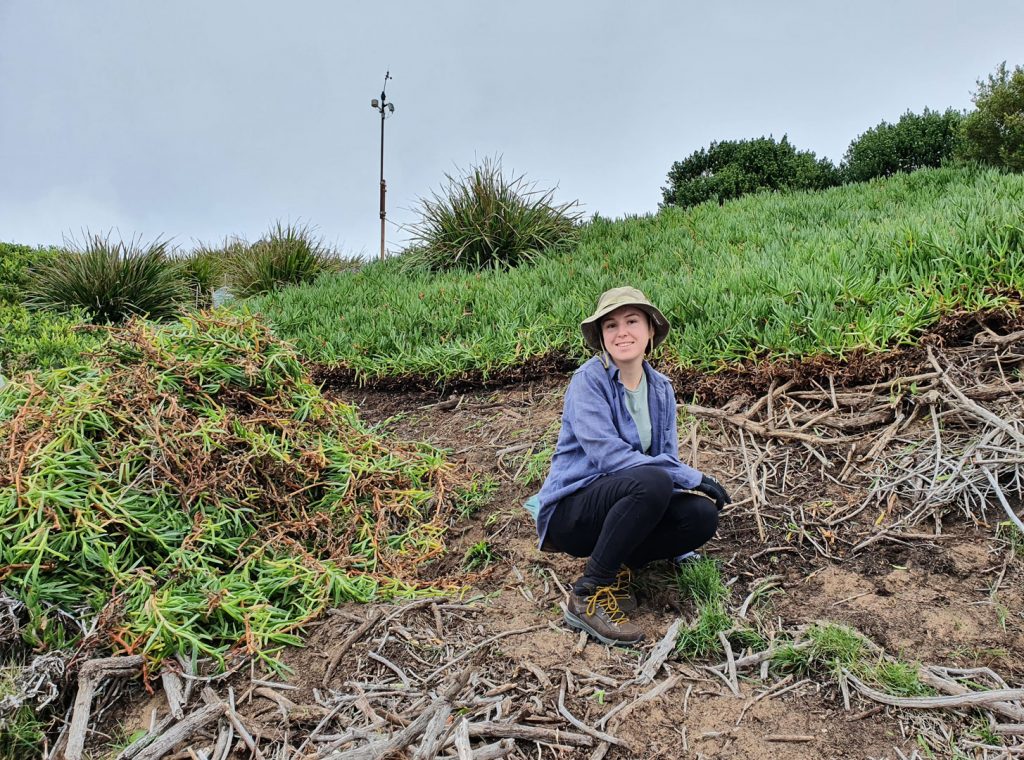 The BOM (Bureau of Meteorology) predicted rain – but thankfully, they were wrong as usual.  The Saturday was a cloudy day with quite a bit of wind which made it fun trying to put weeds in the weed bags!  But a perfect temperature for working on our site.  We had 60 plants to put in on the western side of the site which is very steep, and therefore involves some landscaping, in places – with almost building terraces for our plants so that they are stabilised in the cliff after planting and that rain water will move into their trough which we create in the appropriate space on site.

Half the group worked on one area on the southern western side some worked in the gully area where we planted the five Goodenia dimorpha as it’s a bit sheltered there, the other plants were planted on the western side where they planted some coastal tea tree, Hibbertia scandens, native rosemary, banksia, Melaluca Amillirs. 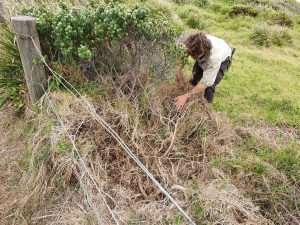 Six of us on the southern western side unfortunately had to spend the first hour removing the non-native pig’s face which had grown down the slope to the proposed planting area – a few months ago, this area was clear, but the non-native

pigs face is a very aggressive grower having engulfed previously planted plants from last month; unfortunately none of the Isolepis nodosa plantings survived being covered by the pigs face.  The past amount of rain we have had, the non- native pigs face has literally exploded, it’s now becoming a problem as big as the Bitou.  Such ashame as Peter Miller spent so much time ensuring we only had the native pigs face on site… alas, it was not so…. 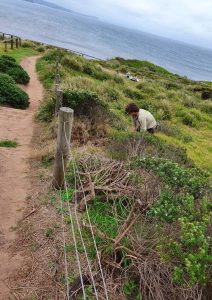 e Bromus grass which has come onto our site as it has moved down the public path way which is Council responsibility – we did ask last year if Council could get contractors in to remove, but this did not happen.  We have asked again this year.

Reefcare advised Council of this weed issue 3 years ago.

Our wonderful supervisor spent the latter morning continuing to remove the kikuyu from along the track fence line and off the native plants – it’s really looking good along there now thanks to Jarrah – as you can see from the photos.

The bulk of other team members moved back up to the western slope to finish with the plantings, removing bitou and weeding as they headed west, whilst two members – Merrilyn and Gen, went around the site targeting a Gladiolus which appeared about three years ago.  Georgia Williams from Council advises that is it “most likely a hybrid but similar to Gladiolus caryophyllaceous”.  This does need to be targeted because if left will spread over bushland and impact plant communities – given the number of seeds around the corm and also the amount seeds in the pod after flowering, I can certainly see how a few of these could quite quickly become more than many – what an amazing set up for over propagation. 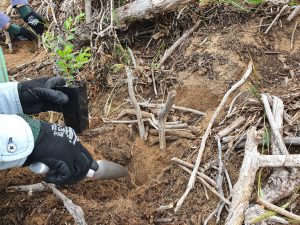 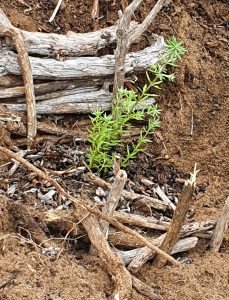 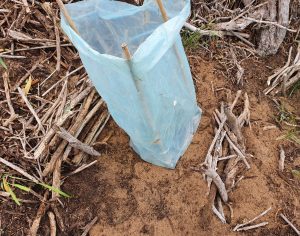 Photos – taken by Lisa Calder
Photo 1 (top): After removal of the non-native pigs face (see pile on left of photo) we have cleared the ground for planting.  We make a long trough and ensure any rain water from uphill, will come into our planting area.
Photos 2 & 3: These photos show Jarrah working along the fence line removing the Kikuyu from the fence and the native plants along side.  This clearing we have tried to do for over 2 years, but due to seasonal invasions this just constantly got put on the back burner – with unfortunate consequences – it has spread into some really good Themeda grassland on the eastern side of the track, which now looks like a weed mass instead of 5 years ago it was just delightfully full of colour at seeding time with that beautiful sienna colour.
Photo 4: As the slope is so steep and the basically sandy soil can readily collapse, we create a mini retaining wall  above the trough, (see the use of the previously cut Bitou to create this retaining wall) then did a hole for our tube stock plant in front of the retaining wall.
Photo 5: shows the retaining wall completed and the plant in the ground, which mulch around the plant and in the created trough. We have found that my mulching around the plants we there is a much better survival rate, as this is protecting the sand which gets very hot and dries out.  Experience has shown that with the mulch that even after a few hot days, that underneath the mulch there is often some moisture and it is not parched soil.
Photo 6:  After planting a plastic guard is put around the plant to not only protect it from rabbits, but it help keeps the moisture with the guard so that the plant does not dry out.  Once established, the guard is removed.