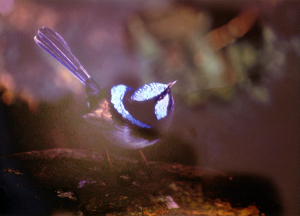 Superb Fairy Wrens are still abundant on Long Reef, their main habitat being the area behind the Long Reef Beach sand dunes between the surf club and golf course. Over fifty Wrens were sighted in one morning in this area and many more could be heard in the bushes. The blue males are particularly hard to sight as they are the last in a group to emerge from shelter and first to disappear.

Ten family groups were counted. Wrens are social, staying in family groups with one dominant (blue) male, his mate (grey), subordinate non-breeding males from previous broods and young of first years brood. Each group’s territory, in which they live, is less than fifty meters in diameter. When feeding they fly low over the ground and hop through the grass staying no more than one or two metres from each other, or from shelter. There can be up to eight birds in a group who chirp quietly to each other to stay in touch. During winter they may merge into larger groups.

Wrens’ territorial limits are areas which contain dense shrub undergrowth with clearings of grass between, on the edge of woodlands. On Long Reef their main habitat is the hind dune area. Birds shelter during the warmer parts of the day in shrubs which have a thick mass of leaves from ground level up. The most frequented bushes used were Coastal Bearded Heath leucopogon or Coastal Tea-tree bushes. At night they roost together in dense foliage.

Wrens feed early morning and evenings on insects – ants, bugs and Beatles. They have few enemies other than aggressive birds and feral or domestic cats. Cats are not seen on Long Reef possibly due to Pittwater roads’ heavy traffic usage, making Long Reef dune area an ideal habitat.

Breeding occurs August through to January. All Wrens in the one family help in the feeding of young after they hatch, this is called co-operative breeding. Pairs form life long bonds but both are extremely promiscuous outside the pair. They nest in thickets of dense foliage, preferably under cover of trees. They also nest in tussocks of grass and spinifex.