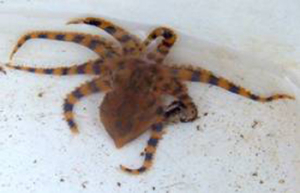 Octopuses, together with squid and cuttlefish (Class Cephalopoda) are highly intelligent predatory molluscs, and one of the largest and most complex invertebrates. They can propel themselves in all directions by sucking water in and expelling it via tube. They all have 8 sucker-bearing arms. The Blue-ringed Octopus (right), which is a small species only growing to about 12cm, feeds mainly on crabs.

Ann, a local volunteer, and her three children once collected Blue-ringed Octopus for the University of NSW for the study of venom. This was before Long Reef became an Aquatic Reserve in the 1980’s. Ann and her family would go to the reef armed with a bottle and sticks to catch the octopus. Did they develop an Anti-venene? The answer is NO.

The octopus has a beak like a parrot and gives a slight bite. Symptoms of being bitten by an octopus are paralysis of the voluntary muscles – the muscles over which we have control i.e. breathing, eye movement, walking talking etc. The victims would appear dead, but their heart keeps beating because it is an involuntary muscle. Artificial respiration, possibly prolonged, is essential until the victim recovers. In the days before the taking of live bait from the reef was forbidden, fishermen would sometimes use this Octopus as bait – a highly dangerous practice.

Bristle worm or Fire worm – Its bristles have venom and break off in the skin when touched. Are painful but do not paralyse and one’s hand feels on fire.

Sting Rays – large in size, black and have a venomous barb.

Common Blue Bottle – A float or bladder 2 to 12 cm long. Below hang appendages which can be up to many meters in length.

Charybdearastoni or Jimble Jellyfish – A small box-shaped jellyfish, its body is about 3cm and has four generally pinkish tentacles which can give a severe sting though is not as dangerous as its tropical cousins.

Glaucus – This animal will sting if it has fed recently on Blue Bottles.

Luckily only two fatalities have been reported.

First Aid information – for treatment of all marine stingers is available at their site:
www.avru.org/firstaid/firstaid_octopus.html