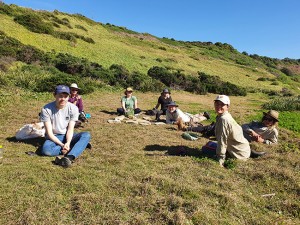 Due to COVID-19 Reefcare was still only permitted to have 10 volunteers on site.

As last month all required procedures were undertaken which included sanitising bush tools before and after work, working at least 1.5m apart and bringing of our own morning tea, due to no sharing of food or drink.

It was a beautiful sunny day, just perfect for working and we constantly had the Nankeen Kestrel hovering in and around us over the grassland, busy looking for food.  Once again we also had our mother and baby magpie circling us at morning tea looking to tip bits.  They often where we are working and when leaving a spot, they dive in to the fresh soil for an easy meal.

We had three of the group working on the top north west slope removing a lot of Bitou seedlings, and bagging any other seasonal weeds, such as thistles which have been prolific this year, as well as some Bitou removal as we slowly move westward.   Further up the rise another volunteer was working in a previously worked area where Bitou had been cut back, but had not been previously poisoned.

Two volunteers were on the southern east slope of the site, once again, targetting Bitou seedlings and bagging any seasonal weeds in this area, such a Ehrharta erecta

One volunteer was on the south western part of the slope weeding and 3 of us were at the bottom of the slope along side the track, targeting asthma weed – Parietaria judaica before it started to produce pollen.  Also in this area we targeted Brome grass from the Bromus family.   We were going to keep going in this area after morning tea, but we found a large area of Turkey Rhubarb –  Rheum palmatum which looked like it was going to seed shortly. The plant produces chains of underground tubers which can be a little tedious to track all of them down – we will need to undertake a follow up next month.

The Burr Medic is in plague proportions and we are hopeful that Northern Beaches Council will be able to have this sprayed before the burrs turn brown and thus produce a mountain for more seeds on our site.