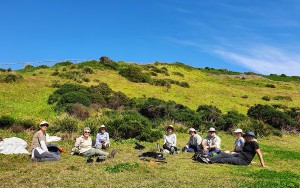 It was a beautiful warm sunny day at Long Reef, around 21+ degrees – with just a slight light breeze – a PERFECT day for bush regeneration at Long Reef.  What a wonderful place to work and all were in a light hearted happy mood.  The morning was made very exciting with 3 Osprey flying around near us.

The four Bitou workers – Julie, Brad, Gen & Merrilyn, continued to slowly move west, high up on the hill, but also as they moved along, they removed as much of the thistles which are flowering and some ehrharta as possible, (we need an army battalion to get anywhere to eliminate the ehrharta on site!) Filling 1.1/2 bags of weeds by the end of the day.

Judith worked on removing Bitou seedlings in the eastern side toward the primary dune; whilst Claire C. worked on thistles along the path.  Lisa, Claire F. & Ivana did a follow-up in the area last month where we found Turkey Rhubarb endeavouring to clear the area of tubers and bulbs.  We are pretty sure we will need a follow up in the area again next month.  This took much longer than we thought and worked there until morning tea.

About 10:30 Council’s appointed photographer on a special assignment to obtain some action shots of volunteers and some shots of some of the bush regeneration beautiful sites on the Northern Beaches, which they can use for promotion material arrived – so Andrew got a few photos in before we stopped for morning tea.  He then did a few group photos with the sea in the background for some and the grasslands slope in the others.   After morning Andrew, moved around the site from the Bitou workers high up on the western slope and then those of us weeding on the flatter areas – and was with us until we finished at 12:00.  Other sites he visited on Saturday were North Harbour and Mona Vale Basin.

After morning tea, the Bitou people took the dozen or so plants up to their area to plant (there was Westringia – coastal rosemary and Correa Alba), as the initial planting site where the Turkey Rhubarb was, will need another follow up, and we would be best with Themeda for the area anyway.

The weeders were going to clear the Kikuyu on the eastern side of our site – but once again, we had a higher priority – the thistles which are in the process of flowering.  We no way got this finished, so didn’t even get to attack the asthma weed which we worked on last month.

The Burr Medic is out of control on our site, and Reefcare volunteers do not have the numbers or time to tackle this horrible annual weed.  NBC were going to poison, but as soon as the signs went up about using poison, the Council were inundated with complaints from the public about using poison – I have requested Council organise a day with ACV (Australian Conservation Volunteers) to target this weed as soon as possible, as it already has green burrs, and it won’t be long until they turn brown and set a million seeds for next year.

There is also gazinea heading down the slope, so this will also need to be tackled sooner rather than later, so that it’s not a future problem on our site.