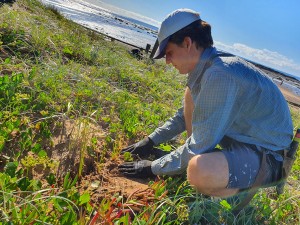 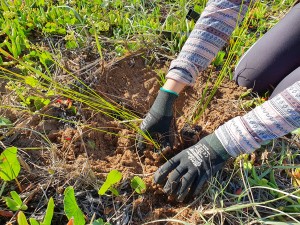 As this was an Easter break over this weekend, we did well with 9 volunteers being able to make the morning – it was quite warm, almost no breeze and the ocean looking so peaceful, after the week of rough seas a few weeks ago when we had 5 days of torrential almost non- stop rain.   But this rain had certainly penetrated our soil, and so this was excellent for the 80+ plants we managed to get into the ground.  Instructions were given on how to plant, deep, ensuring if on a slope that soil is moved to try and capture the most water possible for next rain, mulch around the plant and a few old (previously cut) Bitou branches over the top of them, so that they get time to harden to the Long Reef point salty winds.

The 2 litres of water people brought for our new plantings will really help to them to get their roots into the new area.  We didn’t quite have enough water with us, so Kim kindly went up to the water fountain after morning tea to get more water for our newly planted tube stocks.   About ½ a tray of Lomandra was considered too immature to plant, so Claire C. has kindly offered to take them back to Dragonfly Environmental and look after them until next month, when they should be at a better size for planting out. 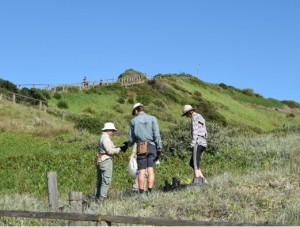 After morning tea, Des and Josh planted the last of the tube stock on the top north western slope (just down from the main track) where last month we had removed about a metre of the non-native Pigs Face from our native vegetation.  After completing this planting of a dozen or so tube stock, Des and Josh joined Alex and Claire F, who were removing Bitou on the far eastern side.  Ivana had to leave after morning tea after planting on the eastern sand hills with Claire C, Alex, Kim and myself.  Julie continued her task of Bitou removal on the western slope – her favourite job; other than Watsonia removal at Griffith Park.  Lisa, Claire C moved along the south eastern hill, removing the non-native Pigs Face off the established Themeda – and moving up the slope to the SE corner, removing non-native Pigs Face where appropriate to not cause erosion,  Ehrharta, Summer grass (which has come onto site, due to spreading down the public path to Long Reef point), Buffalo grass, Burr Medic, a couple varieties of clover, flea bane etc. This area is doing well with the native geranium seeding and spreading and also Myoporum which has seeded amazingly well in this area – being in such a windy area, it is not in its usual scrub form, but hugging the ground.

All in all, it was an amazingly successful day.