We were lucky that the temperatures were in the low 20’s, but there was some humidity so we were a little uncomfortable all wearing our long pants and long sleeved shirts and boots =  oh, arrh… the price we are prepared to pay to make Long Reef point beautiful.

We had 3 people working on the Bitou on the high western slope, and they weeded as they went along, few thistles still around, Ehrharta, hundreds of Bitou seedlings – and a weed Gladiolus species which had appeared on site a few years ago in the eastern sand dunes and is now being found on the high western slope, the flower is a lovely pink colour with hints of mauve, but to remove takes a lot of time (around 15mins per plant) as around the main bulb/corm are dozens of little white seeds, all of which need to be collected.  This weed originates from South Africa, is classed as a garden escape and can spread by the wind.  It can become extremely problematic like Watsonia, so it is important to remove the ones we find on site as fast as possible.

Three of the volunteers concentrated in an area alongside the eastern part of the track, targeting Bidens pilosa (also known as cobbler’s pegs and for some weird reason, Farmers Friend!) where most plants were just forming those horrible seeds, but a few plants were more advanced.   Is thought this weed originated in tropical America.
“….It is also regarded as an environmental weed in New South Wales, Queensland, Western Australia and the ACT. It is considered to be among the top 200 most invasive plant species. This species is readily dispersed by man’s activities and dense populations can out-compete native species on the exposed margins of bushland and in revegetation sites.” [1] There was also some flea bane, bitou seedings and that horrible asthma weed Parietaria Judaica – The leaves and stems are covered in curled hairs that feel sticky and as it’s life cycle can be 2 – 3 weeks and we come monthly, it will take some time get rid of this weed.  The Turkey rhubarb keeps appearing where we initially cleared it a few months ago, but it is slowly getting less in that area – we just have to keep at it each month.  One volunteer scouted the eastern part of the site for flea bane, and another worked on bitou removal on the north eastern sand dune. 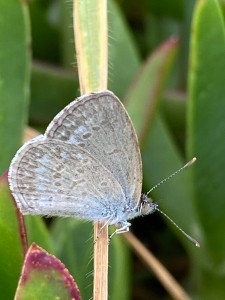 Des scoured the site for Asparagus fern which he also did last month and had a bag full by morning tea.  And talking about morning tea – we were like excited children in a school yard – there were so many of the small blue butterflies all over the site, it was very beautiful to see and rather exciting.  Everyone was talking of them during morning tea.  We are lucky as one of our members is studying entomology at University, and Genevieve Law was able to identify these as the Common Grass-blue from the tribe Polyommatini.   Gen Law wrote ….These butterflies look like Lycaenidae (‘blues’) – they are generally quite small, somewhat furry and grey/blue in colour. They are often cryptic at rest, and you often can only see the blue colour when they open their wing.” 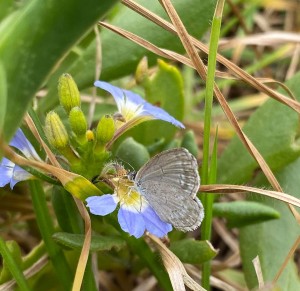 tterflies have an interesting white spot on the club of the antenna – which can be seen in the great photos taken by Claire Cashell our site supervisor from Dragonfly Environmental.

We spent some time at morning tea also discussing our plans for the work on the site for 2021 –Claire Cashell will report our plans to Northern Beaches Council as required.

After morning tea most went back to their favourite spot, but three moved to the eastern dunes, targeting kikuyu, seasonal weeds and on the far eastern side removing pigs face off Themeda and Ehrharta.