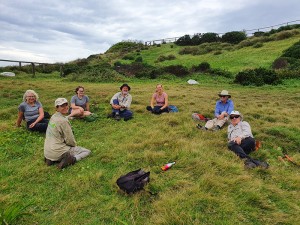 There were just 8 Reefcare Volunteers this month arriving with very inclement weather, not knowing with the storm front coming across, if we would get 1/2 an hour of work 1 of work… as it happened we managed to have morning tea and work until about 20 to 12 – when we had some drops from the sky – we thought this was the front, so we left the site.  As it turns out, we could have worked through this as it didn’t pour down until 12:30 when Des, Lisa, Julie and Aurelie were safely ensconced having a well earned coffee at the Outpost Café.

The usual four Bitou workers (Julie, Brad, Merrilyn and Gen) worked on the far western slope alternative time removing Bitou and weeds.  Merrilyn is keen to target the Gladiolus species which is exceedingly time consuming, ensuring that all the little seeds of the main root bud are collected.  This is a new weed on site as of last year with a single plant appearing on the sandy eastern part of our site about 3 years ago, so it’s rather surprising that it is now turning up in annoying numbers on our western slope.  How did it get there – all over our western area?

Aurelie, Claire F. and I weeded an area on the western part of the path which had a lot of Biden’s Podesta which we have not had a lot of, so good to eliminate this weed which the seeds are viable for 20 to 30 years, we continued on this section to weed Blackberry nightshade, asthma weed and Ehrharta erecta.  After morning tea, Claire worked on a big Asparagus fern along the track and then attacked some Bitou on the eastern  edge of our site.  Aurelie and Lisa worked on Burr Medic on the sand area east of the main track.