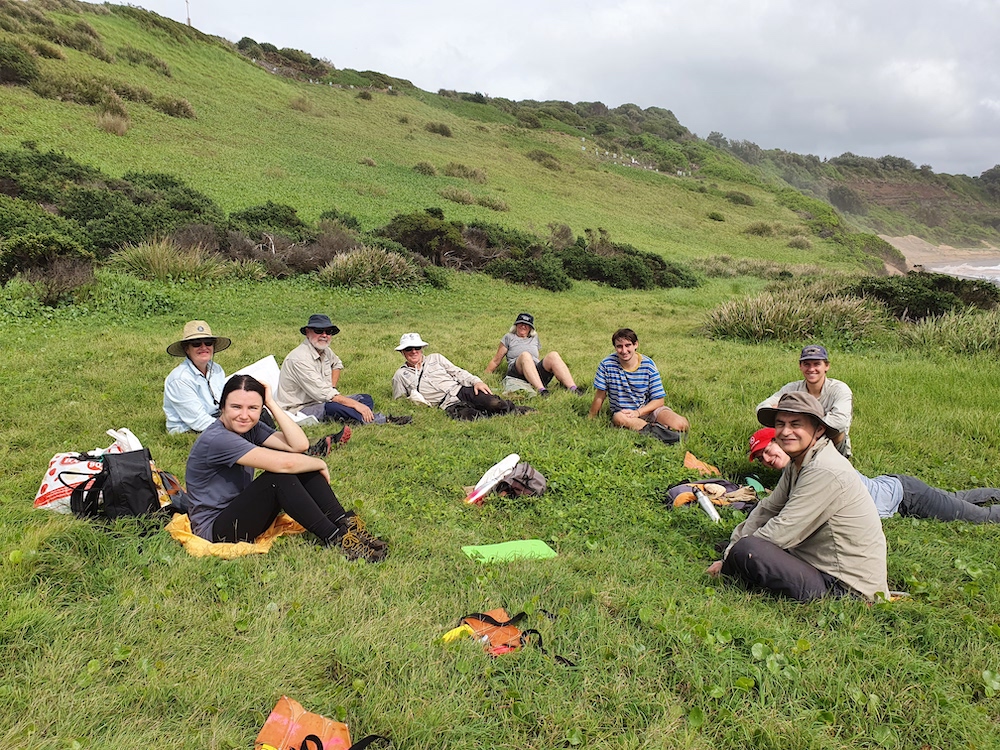 Sydney has had weeks of non-stop rain, but miraculously – we had Saturday without a drop. But my gosh, it was tremendously humid. Despite the weather we had a great turn up of 11 volunteers plus our supervisor.

In the morning, Elias our supervisor for this month from Dragonfly Environmental along with Josh, Alex and Rohan removed more of the non-native pig’s face on the steep south western slope, whilst Claire, John and Issy worked on the flat targeting weeds, but mainly burr medic. Des, Brad and Merrilyn all worked on the western side removing more bitou. Des and Merrilyn had around a dozen plants – mainly creepers to plant around the area.

Julie worked over near the old creek removing bitou and planting around 30 banksia cones – so here’s hoping we may get some banksia seedlings coming up.

After morning tea, Issy and Claire collected some small Warrigal green (Native spinach) from the lower south slope to the west of the track which has absolutely flourished in the past few months with all this rain, and then went up the western slope planting in the area cleared with pigs face, and also where Des, Brad and Merrilyn had cleared bitou. So, we have 3 species of creepers and Warrigal green to cover this steep slope, which I am sure will prevent erosion. Alex, Josh and Rohan went to the bottom of the western slope and worked on removing Bitou in this area – as I say – heading west, bit by bit. Lisa and John went up to the steep south eastern end of the site and did general weeding and removing mainly in this area, Burr Medic, Ehrharta erecta, and bitou seedlings plants. This area is doing well, as we have many self seeded natives in this area which is reducing the weeds. couch and winter grass will be a target in the future when we get time.

The area is looking good, so hopefully we maybe able to spend some time in the near future to tackle the Kikuyu.

There were some really exciting sighting and finds this month which included:

· A new native creeper with lovely tiny purple/white pea flowers in the bottom grassland, just west of the track – Glycine clandestine
· Quite a number of beautiful large mushrooms just above the north facing dune – which in places with this weather of rain and high tides, the dune have in some sections lost almost a meter of cliff.
· A lovely delicate white Gilled fungi – we believe to be a species of Trogia. Found on the flat, east of the track.
· There were a number of Tiger Moths around the site – and Lisa managed to get a couple of good photos of one on some Warrigal Green (native spinach)
· John Isles got a photo of which we believe to be either a Grass Dart or a Darter (thinking probably the latter)
· There were 15 Oyster catchers on the shoreline at the most eastern point of Long Reef. Lisa cannot remember ever seeing this many of this bird species together at Long Reef; an amazing sight.
A hive of hairy caterpillars 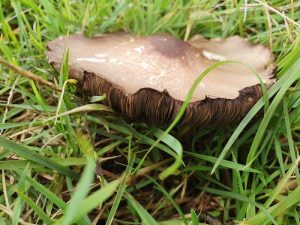 · There were two other sea bird species on the shore line – the smaller one in great numbers – probably 100+, we think they maybe two of the migratory species that we are lucky to have arrive at Long Reef (hence we the no dogs signs for the reserve area), but as none of our members are bird watchers, we were unable to identify the species.