A Copper mine was in operation during the 1930s. A shaft some thirty metres long ran into the southern cliff face at the end of Long Reef beach, just where the walkway starts up the headland (right). The entrance has since been concreted over to prevent children climbing into the old mine shaft.

An old rusty winch partly buried beside the fishermen’s hut at Fisherman’s beach is similar to the type once used in mining – we think it is the original winch from this mine. Local fisherman Des Hasler, a member of the fishing club, restored the old winch for hauling his tinny up the beach (below left).

Local resident Peter Treloar remembers as a child climbing into the old mine and walking down the rail track and seeing buckets on buggies for winching copper diggings to the surface. Bill Reilly, a local fishing identity, remembers also as a child going down the mine, “it was wet and scary with bats flying around your head”. 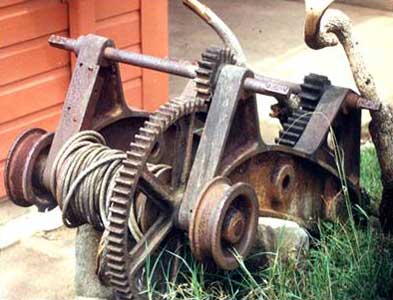 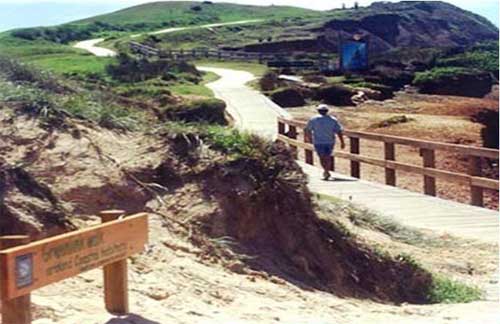 In 2001 a rusty metal four-wheeled buggy was exposed at low tide on the reef, just below the old mineshaft entrance. Within hours and before council or local historians could inspect it, it was gone – only the tracks of a four-wheel drive were left in the sand. If anyone knows where it could be found pleases contact Reefcare. The buggy looked similar to the one in the photo at right.