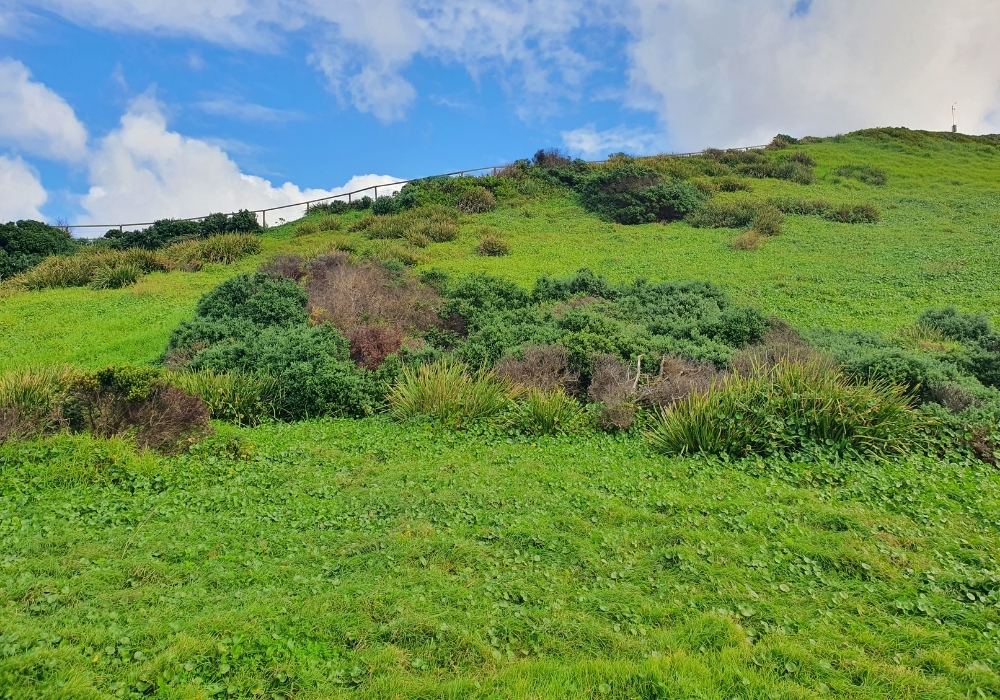 It was a beautiful sunny day for the twelve of us to work at beautiful Long Reef point. Josh and Alex worked on removing the rest of the non-native Pigs Face off the Themeda on the lower northern west part of the site. A number of us worked for awhile down the path targeting Parramatta Grass immediately next to the track, so that it doesn’t come down onto our site. Maria stayed longer on this task, and Julie targeted Asparagus fern. Brad and Gen worked on the lower west side on various weeds whilst John, Izzy, Jarrah, myself and latterly Maria worked around near the bottom of the track targeting Asthma weed, Bidens and Buffel grass. As Des was in isolation, Merrilyn took over his role and scouted around the sight for asparagus fern, collecting other weeds as she moved around the site – she had a significant amount of weed in her bag by morning tea, that’s for sure.

At morning tea, Brad pointed out all the dead trees we had in our area, which was quite a shock. Jarrah said that he had seen this on another site, and that perhaps this is due to the amount of excessive rain that Sydney has experienced this year.

After morning tea Merrilyn, Gen and I did some planting in the eastern dunes as we had about half a dozen each of Lomandra and Kennedia (Coral pea) tube stock, whilst Alex and Josh also worked in this area on the non-native pigs face until they had to leave early for soccer. The previous areas cleared of the non-native pigs face are doing well with plenty of spinifex 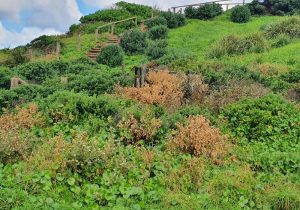 moving in as well as native geranium. Brad and Izzy attacked a large patch of Turkey Rhubarb up the top of the south bank (which Brad found), and unfortunately had seeded quite a bit, but they were able to get a lot of seed that was still developing. Izzy told me at the end of the day… ‘it was the worse job ever!” John, Jarrah and I were going to start on the Kikuyu along the northern sand dunes, but low and behold Jarrah found a Turkey Rhubarb, well into and under a large lomandra longifolia just east of the track – it was very difficult to get in there and get the buried red bulbs, we really needed a wombat.

As we didn’t get to start removing the Kikuyu from the Lomandra along the northern sand dunes, I’ve promised Jarrah, this will be our priority for next month.