When you stand on Long Reef rock shelf you should let yourself be aware of what the scene tells you about the past of this locality. The sand is the result of the wearing down of mountain ranges and of unimaginable numbers of shells, the one time protection of living things which utilised the sea’s minerals more efficiently than we can. The coal seams deep below remind us that once here was a region of swamps which lasted an immense time in a delta before the land subsided and sand and mud covered the area and, in time, consolidated into stone.

The rise and fall of the land and the succession of environmental changes over millions of years is evidenced in the cliff face, and is more easily seen in the rocks lying where they have fallen on the rock platform.

A dip into the ocean

Look south of Long Reef and you’ll see mostly blocked cliffs of Hawkesbury sandstone. Look north and there are instead layered cliffs of Narrabeen shales and sandstones. The tallest headlands Bangalley at Avalon, Beach are both capped by Hawkesbury sandstone. A close look at the cliffs of the different headlands is like gazing at a sandwich of geological events. Try to remember what the Long Reef chocolate shales look like, as you should be able to follow them as you move towards Bilgola South Head, where they finally dip into the ocean. 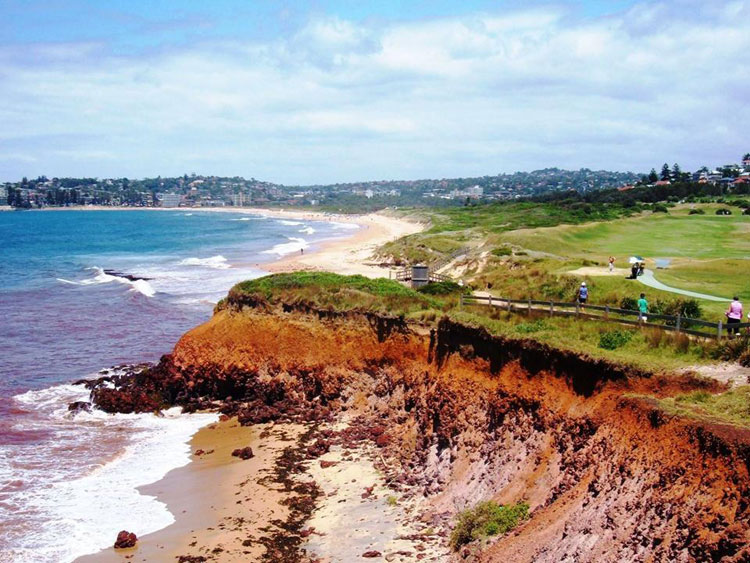 The chocolate shales which form Long Reef known as Bald Hill claystone are more commonly called “Redbeds” from the iron deposits which colour the rock. Despite the iron, they are rather soft rocks, and easily eroded by the constant action of waves and wind. This soft nature together with the fact that the red beds lie in a nearly horizontal bedding plane has led to the extensive development of the Long Reef rock platform. Wave action at high tide has continually eroded bock the cliff face leaving a wide rock platform to be exposed at low tide. Look southwards, to the abrupt sandstone cliffs of Dee Why Head, and note the contrast. This sandstone is much more massive and resistant to wave action than the Redbeds, so the cliffs are steeper and the rock platforms less extensive.

You may know that the northern end of Palm Beach is a tombolo, but did you know that Long Reef is also one? And what is a tombolo, anyway? A Tombolo is a sand bar which connects what was once an island, to the mainland. Around the southern entry point off Long Reef Beach you may see black peat deposits overlying the soft, grey clay. This indicates that, about 3,000 years ago, Dee Why Lagoon was much larger and its surrounding swamps extended right across the low-lying area of Long Reef Point. After heavy rains, this is easy to believe, as a large lake often forms across the lower part of the golf course.

Long Reef Headland is unique – the sand on each side of different. On the south side it is finer quarts sand partials –ground up Sydney Sandstone. On the northern side it comprises mostly of crushed seashells and on the eastern side Black sand is found in the intertidal zone. Your visit to Long Reef can open your mind to a deeper understanding of the world we presently inhabit.

Here is an informative video by Pittwater Pathways: